Happy New Year!
and The Transfiguration of the 'Villa de Cuivre' Windows


I hope you all are having a grand holiday season!   I wish you all a very Happy New Year too! 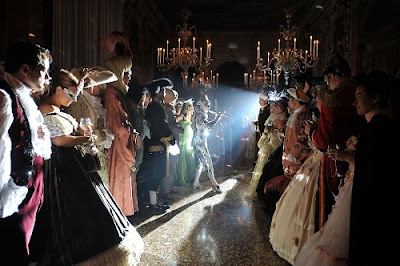 One thing I really love about the holiday's is that I always get to do that project that I have wanted to do, just hanging around, waiting patiently for it's heyday.  This year, that project was getting solidly off and running on the Steampunk Manor...er…. Villa de Cuivre… I guess.  Doesn't roll off the tongue in quite the same way!

In my last post, I shared with you some of the first efforts I would be making toward getting started this year with miniatures again.  Of those, I have finished fixing the kitchen door (and broke the other one in the process!  That still is not fixed. I needed more practice I guess.  One step forward, one step back...!)  The main project for me this week was working on the transfiguration of the Villa's front windows.

The old windows were kind of cool....  in their own way. 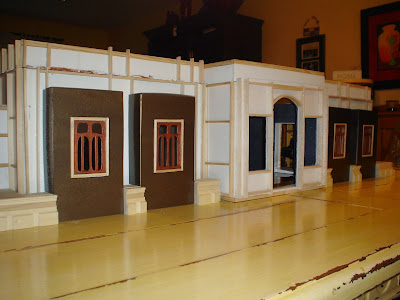 But the more I looked at them, the less they looked like they belonged on this villa.  They belong on a forest cottage.  You know, snuggled back into the deep dark forest on the gothic inspired cabin that Briar Rose grew up in.  Now those are the right windows for that.

But when I compared these windows to the other windows and doors on the villa, they just did not play well together in my mind.

There are the butterfly reminiscent windows for the grand parlor; 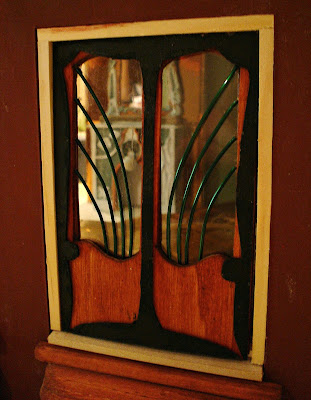 The Victor Horta Reincarnation windows for the Grand Entry.. 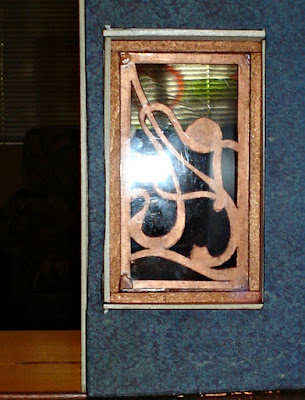 And the Victorian Double Doors in the Kitchen. 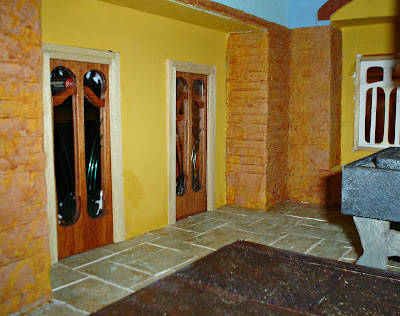 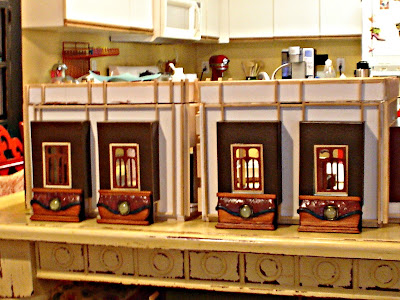 See my point?  Even the "pocket gingerbread" beneath the windows upstages the windows... So I had to rethink.

I knew I wanted something that had the same sort of effect...but this reincarnation had to be more in the spirit of the other doors and windows in the house (and in it's future!).  They had to take on the bold, brash elegance of the rest of the house as well.

I also knew I wanted to keep the arched and somewhat Noveau air of the windows.  And I wanted to open up the view into the rooms from outside the villa.

It actually took me a while to come up with the new ideas, because I was also working on the ideas for the new Grand Entry door that was such a dismal failure before.  I wanted them both to integrate together, and also to echo the spirit of some of the other elements of the Villa.  More on that dang door in another post.

In the end, I ended up with this: 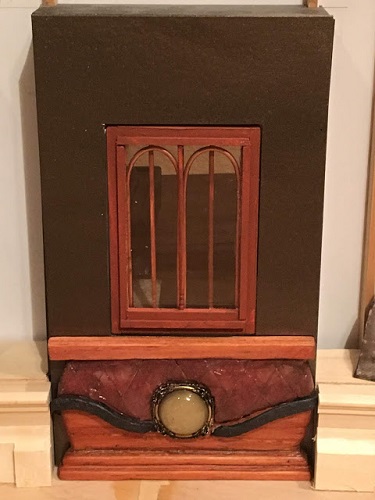 I think it accomplished what I set out to do.

I used the same basic processes I used in the first set of windows I constructed.. piecing together the frame using basswood strips.  But I learned a lot from the first set of windows I did, and I feel that these are much better constructed.  Using the square, measuring more carefully, adjusting the amounts of glue and removing excess glue, all things that come from experience... made the job much easier and much faster this time around. 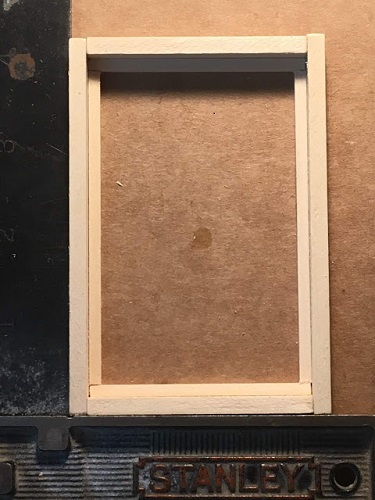 Over and above the basics, there are several "new" techniques I used for these windows. 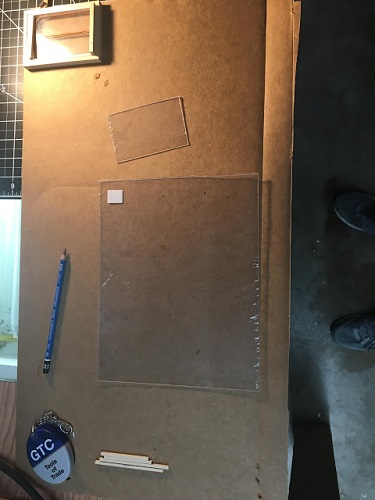 First, I actually purchased acetate (at Hobby Lobby of course!) for the windows, because sometime in the last few years the plastic being used to package fruit, bread and other perishables has lost it's shape.  It is so much thinner than it was?  Or maybe it is just Texas.  Who knows.  I was just not happy with it.  And given the opportunity to do this again, I will purchase the "real meal deal" again.  It makes such a difference in the final product.  Not quite as easy to cut, but the result is much nicer. 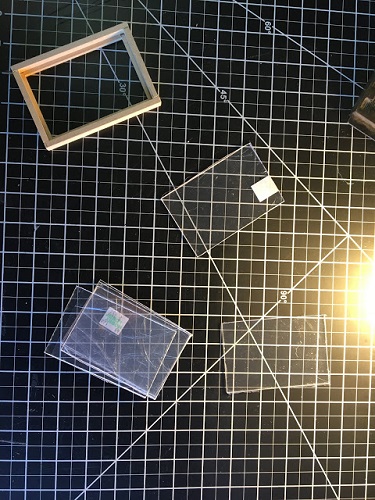 Secondly, there are actually two layers of window in this set.  This is because sandwiched in between the two window layers are two arches made of copper tubing.  This extra set of window surfaces really made this window feel more realistic... it loses some of it's detail in the photo, but it really gives the window a sense of being multi-dimensional. 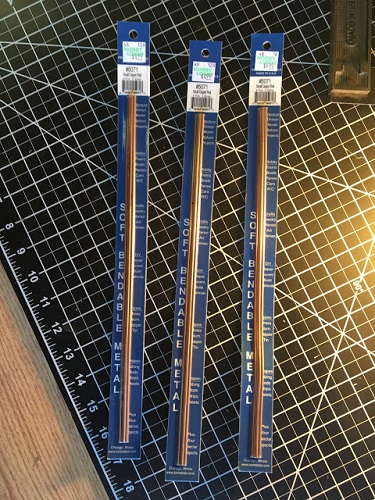 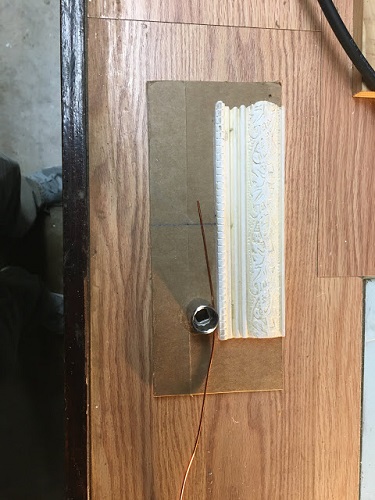 I bent the tubing into arches using a jig I made up from cardboard, a piece of old molding, and a socket...  Yes, you heard me.  I glued a socket to a piece of cardboard.  (Very long story... I have a son who carried off my tools regularly.  I could probably replace Sear's inventory of socket wrench supplies!) 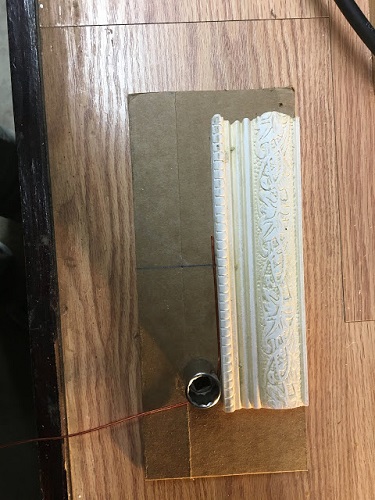 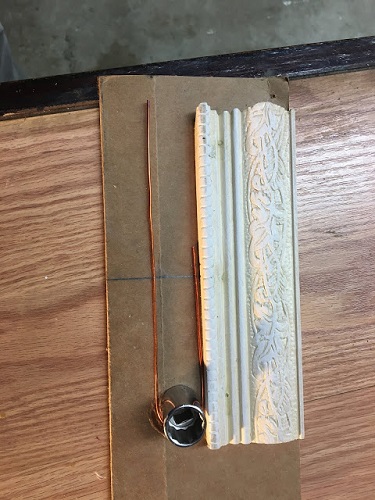 Perfectly arched copper tubing every time!  With the slightest bit of adjustment and straightening... I had perfect arches ready for my window. 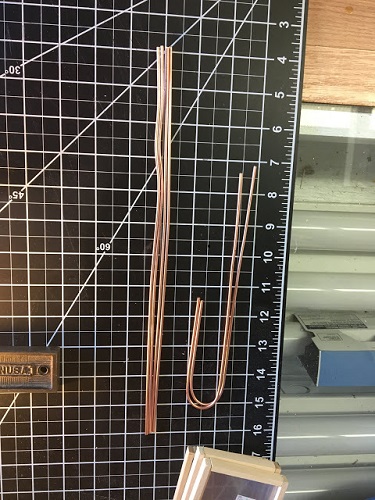 Once the arches were bent, trimmed out, and straightened, they were sandwiched between two sheets of the acetate.  The whole thing is held together by tension. 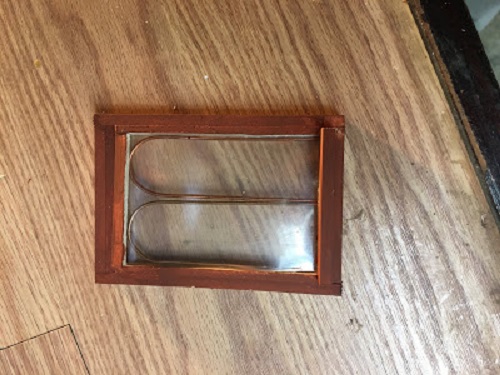 I did glue the wood trims in, but the wire is not glued, and is held by ensuring that there was just enough tension to keep the two wire arches in place, and enough pressure from the two pieces of acetate to keep them straight and level in the window.  I felt pretty pleased with myself! 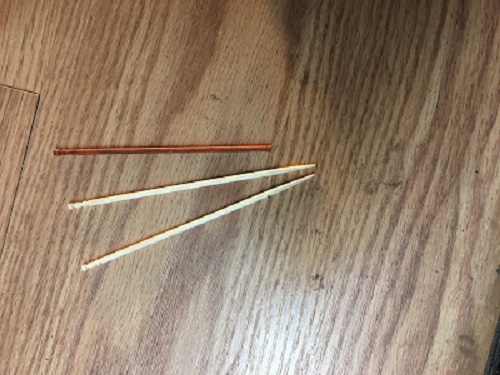 To finish off the windows and to help hide a few (minor) sins, I used skewers you can buy from the grocery store, with tiny carvings at their tops, and cut them to size to add some elegance to the window assembly. 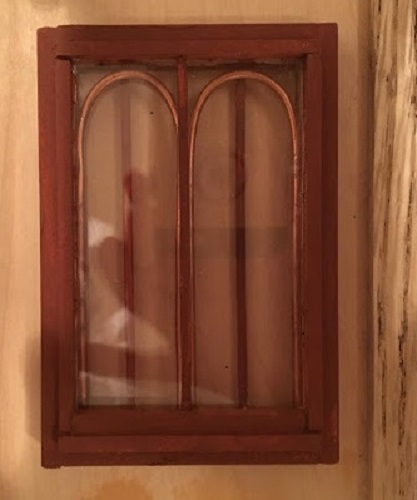 I cut the tips off at just the right place to again create a tension, so that I did not have to glue over the window.  I painted them the copper color and installed them... three to the inside, and 1 to the outside.  I liked the final effect a lot. 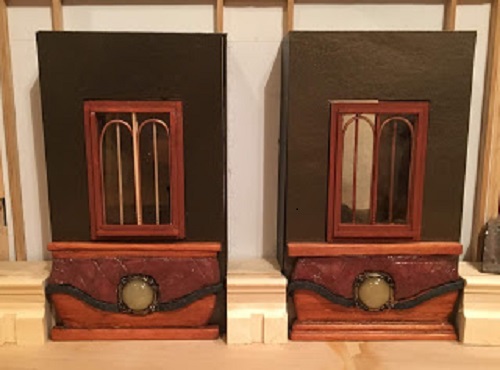 There is still some work to do.  I have not painted all of the mullions yet... I am stuck on the horns of a dilemma… I cannot decide whether to paint the mullions the same color as the windows themselves, or to go to black.  I am leaning toward the black (not pictured), since I think it will add the contrast that is missing on the left... you can see the contrast of the wood tone to the copper, and I like that effect, so am thinking I will duplicate it with black instead.  Any opinions are welcomed!

Once I have completed the windows, I plan to begin on the infamous grand entry door.  I have some new ideas that I think (I hope), I can execute this time!

Enjoy Your Holiday!  Until Next Time,

Welcome to the blog! I appreciate your visit, and welcome your comments!